Gines Serran – Artistic and humanitarian contribution to the world 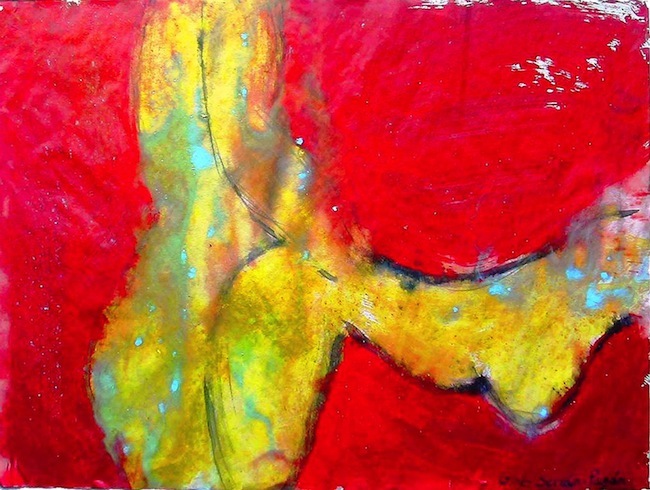 First International Award of Anthropology for reinterpreting anthropological works done in Andalusia, Spain (1982). Lives with the American Indian Movement (AIM) at Yellow Thunder, Lakota / Sioux land (South Dakota, US). Inspired by Indians, start painting in New York a series of abstract paintings using an original mixed technique, which will be the base of his artwork (1983). Becomes Consultant to the United Nations (UNFPA) on Indigenous Affairs, and creates health projects to reduce infant and maternal mortality rate in 100 peasant and indigenous communities of Mexico (states: Oaxaca, Puebla and Nayarit) (1985-1988). Federico García Lorca International Award of Poetry for his book “Between the Sea and the Iron,” (1984). Exhibit paintings, ceramics and sculptures in NY, Texas and Mexico. His apartment in Manhattan becomes a home for the American Indian leaders. First International Award, New York TV and Video Festival (Director and Writer, “Born Again Primitive,” Condor Prod., Zurich /Skyline TV, NY, 1986). The Cuban Government invites him to exhibit at the Casa de las Americas Museum (La Havana, 1987). Creates objects and sculptures on clay with Korean ceramist Hui Son Yang; exhibit them in New York and Mexico. Work in India, dedicates his exhibition at Dhoomi Mal Gallery to poet Tagore.

Travel to Tepoztlán with artist Fernando Botero to meet painter Rufino Tamayo. Maestro Tamayo introduces him Japanese sculptor Kyoshi Takahashi who years later will be his mentor in Japan. Exhibits frequently in The United States where his art becomes part of important private and public collections; exhibits, as well, in Mexico, Cuba, Spain, India, Germany and Switzerland. During 1990-1997 keeps residence in New York but lives mostly in Asia and Australia.
Lives during several years in small villages in Japan: the fishing people of Uchikawa (Shinminato), the rice peasant community of Kuromaki, and uses a traditional “Gasho” as an atelier in the remote mountains of Gokayama, in Aino-Kura (Toyama). Fuji International Award, Metropolitan Museum of Art, (Tokyo, 1990). Since 1990 to 2005, art director Katsuhiro Maruyama, from Art Robe Gallery in Tokyo, organizes forty exhibitions of his paintings, ceramics and sculptures, all over Japan. Sculptor Takahashi exhibits with him at the Museum of KanazawaBefore he passed away in 1994 they had a “Two Men Show,”Azabu Museum, Tokyo. Exhibits at the Museum of Yokohama where a translation in Japanese of his book “Poems to the Sea” is presented by M. Yamaguchi, M. Nomura and actor Gaku Yamamoto. Visit the atelier of sculptor Isamu Noguchi in Mure (Takamatsu, Japan). Donates a significant number of his art works to charity centers and hospitals in the US, Mexico, Spain, Philippines, China and Japan; donates as well to help the victims of nuclear bombs in Hiroshima and Nagasaki (1990-2000). Lives in Murnau (Bavaria, Germany), and dedicates his work to Gabriele Munter and Wassily Kandinsky. Honoured by American Indians for his work defending their human rights; actor and Lakota Chief Russell Means adopts him as “Brother” in the Sun Dance ceremony (Montana, 1992). Paints in Moorea, Tahiti, and does a series of works dedicated to Gauguin. Exhibit a collection of his art work in Peking (China, 1993). Art director Sandra Walters exhibits his work in Hong Kong, with sculptor Henry Moore, Motherwell and Hockney.
Holdsworth Gallery shows in Sydney a collection of art works done in Byron Bay, Blues Beach and at his Queensland Indooroopilly atelier, Brisbane. Researches on one of the oldest traditional ceramics in the world, the Jomon culture (10,000 years old). 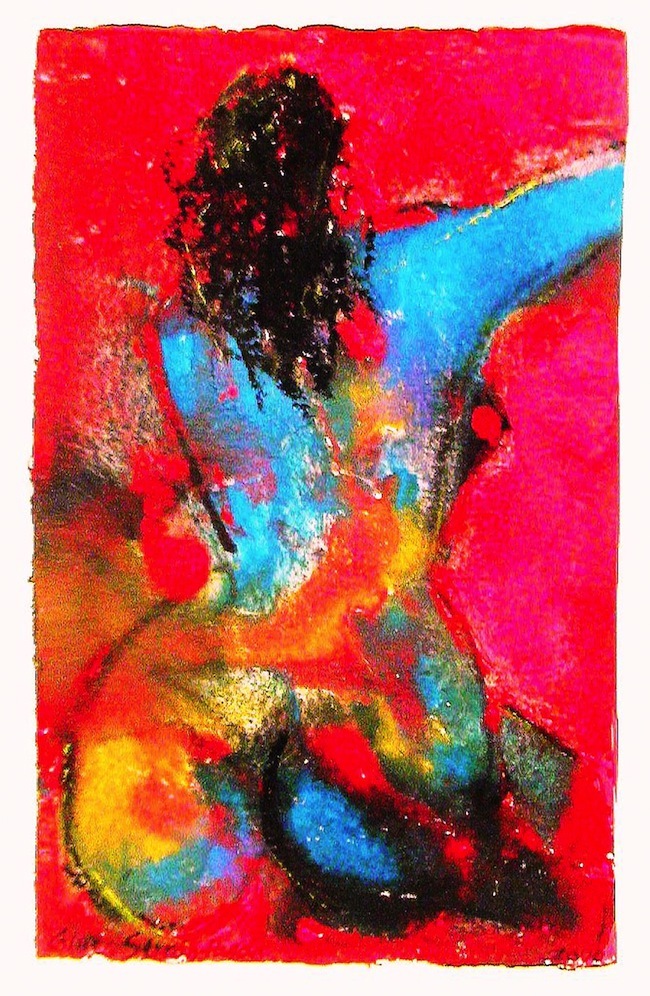 In Manhattan studies new ceramic techniques with J. Glasser. Meets ceramists R. Koie in Tokyo and P. Soldner in Mendocino, and learn in Malaga to make Nazari ceramics. Creates an innovative collection of objects and sculptures mixing clay, glass and metals; exhibits them at the Museum of Ceuta (1995), his home town, inspired by archaeological remains. Later on, shows them in Tokyo, Hong Kong and Manila. During 1994-1999, creates paintings, sculptures and ceramics in Sanur (Bali, Indonesia), Pangkor Laut (Malaysia); Palawan and Bohol (Philippines); and Chieng Mai (Thailand). Exhibit his work at Duta Fine Arts in Jakarta, Indonesia, at Takashimaya Gallery in Singapore sponsored by philanthropist VeeMeng Shaw, and since 1995 till present, exhibit at Duemila Gallery (Manila, Philippines). Does the portraits of the Philippines presidents Laurel and Osmeña, and the ancient poets Basho and Yakamuchi.

For his art contribution is honored with the City of Kanazawa Medal, 1996. Moves to Southampton, New York, and creates in his farmhouse The Red Barn Atelier (1997) a not for profit organization to help writers and artists. During five years organizes with a group of artists: Paton Miller, Eric Ernst and Nova, important exhibitions, book presentations and concerts: Leonard Peltier’s paintings, works by Maestro Mosca, renowned painter Larry Rivers, pioneer sculptor Lassaw, and many others established and emergent artists’ works are exhibited.To celebrate his 100 exhibitions around the world, exhibits together with Russell Means in Santa Monica, 1998. Creates a series of works dedicated to poet Walt Whitman exhibiting them in New York, Santa Barbara and Tokyo. Shows at The Rotunda Gallery, Hong Kong, on Tang and Sung poets: Li Bai, Wan Wei, LiqingZhao, Su Tung Po… Exhibits in Kuala Lumpur, Malaysia, inspired by Omar Khayyan. Exhibits with Miller, Ernst and Nova, at the Shanghai Art Fair, 2000. Start a law suit against the Mayor of Southampton to protect his farm animals. Wins the case with the support of artists and writers; the town passes a law to allow farm animals in the area. 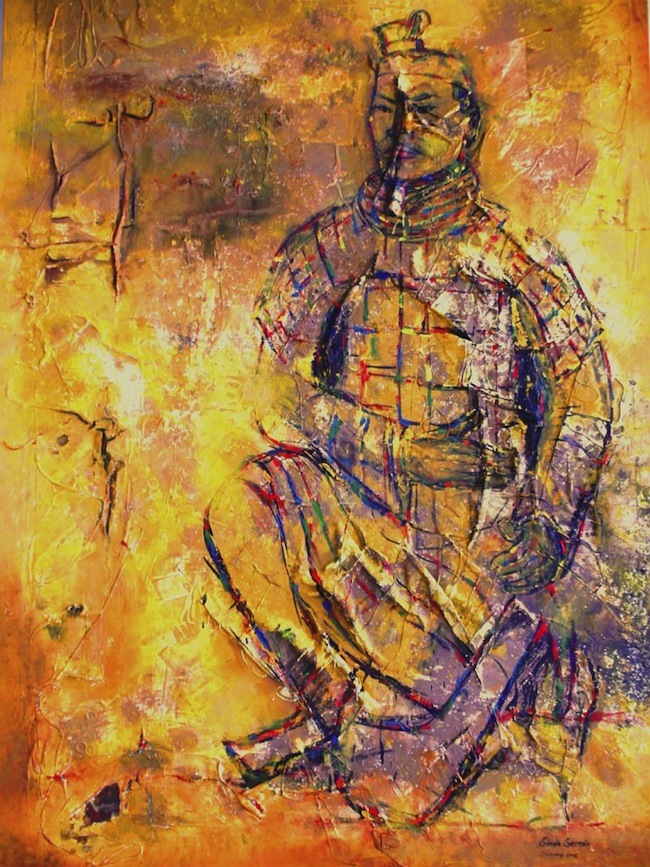 Exhibits in Hong Kong; donates forty paintings to the HK Society for the Protection of Children; exhibits in Shanghai, Hang Lung Plaza. Moves to Spain in 2002 and build a studio in the hills of Grazalema, Spain. The National Geographic Society includes him as one of the outstanding contemporary Spanish explorers, 2003. Classifies the Memories his father left about the first trip the J. S. de Elcano training ship did around the world during 1928-1929 and publishes a book about his father entitled “Memories of the Wind,” (2004), prologued by Cristopher Columbus, direct descendant of the discoverer, and organizes an exhibition at the Museum of Ceuta. Solo Show in Bangkok, at 100 Tonson Gallery, organized by Aey Phanachet. Art Robe Gallery, Tokyo, inaugurates his 40th exhibition in Japan (2004). Galleria Duemila open his 10th show in Manila, “Spain and the Philippines.”

From 1980 to 2005, he has had 125 exhibitions (70 individual shows) in 15 countries around the world. Curators, ambassadors and art galleries from six countries request the Ministry of Culture in Spain his art contribution world wide to be recognized. Moves to China and creates sculptures in bronze (2005). Studies Chinese bronzes at the Museum of Shanghai; researches the classic art of Pisano, Duccio, Michelangelo, Bernini, Canova, Da Vinci and Rodin. Creates two sculptures which are considered as the biggest Classic Mythology bronze sculptures in the world, eight meters high and eight tons of weight each.: “The Pillars of Hercules: Abyla and Calpe” and “The Union of the World: Monument to World Peace.” Creates for the first time the sculptures of Medieval Muslim cartographer Al-Idrissi, the Jewish thinker Josef Ben Yehudá Ibn Aknin, the Greek geographer Strabo, the Roman geographer Pomponius Mela and the Portuguese Infante Fernando el Santo. Gallerie Katia Granoff exhibits his art work in France (April-July, 2007). Unveiling, in Miami, “The Union of the World” (2010). The Mayor presents him with the Keys to the City of Miami for his artistic and humanitarian contributions to the world.

Thank you for being a part of this, for your support, encouragement and confidence my dear friend. 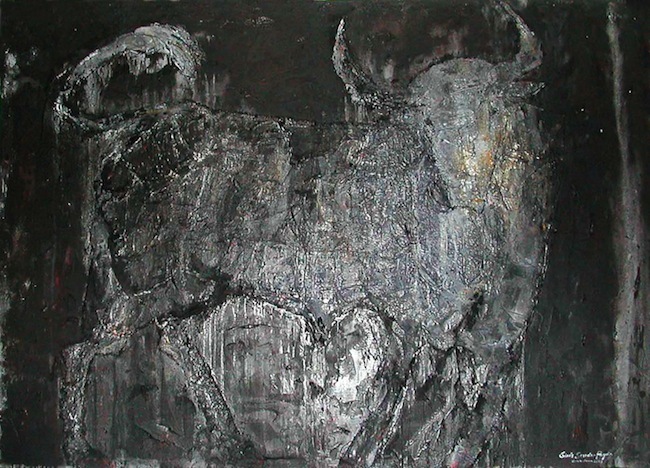 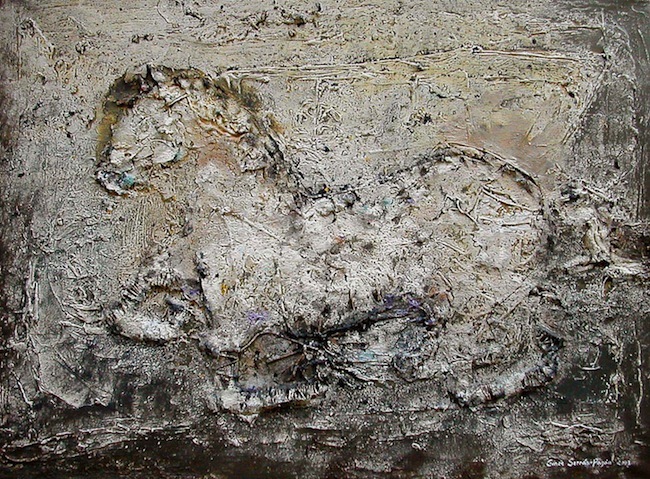 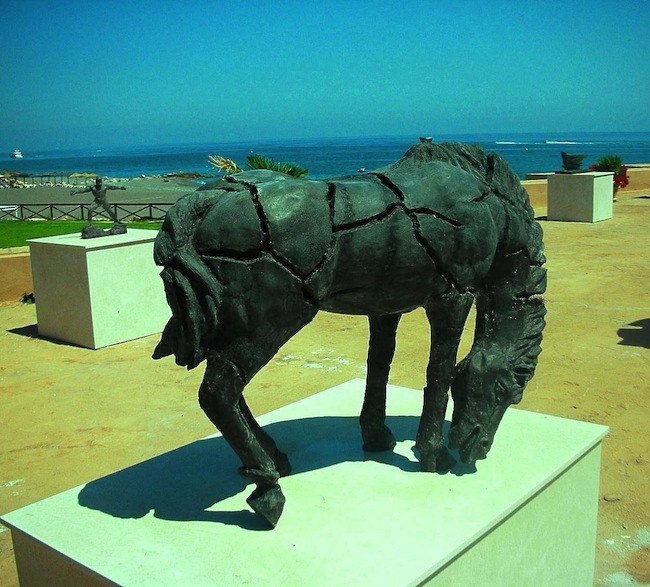 PrevPreviousNini Baseema – Kissed by a muse
NextJohn R. Math – Connected to nature through source and essenceNext
error: Content is protected !!