Canuto Kallan – Into the unconscious depths of human existence

Canuto Kallan was born ίn 1960 ίn Copenhagen, Denmark. Before studying at the Athens School of Fine Arts, he graduated ίn 1989 from the Technical College of Copenhagen as a cabinet-maker and was awarded the Silver Medal for Woodworking by the Queen of Denmark. At the same time he was studying at the Technical University of Denmark, from where he graduated in 1990 as a Mechanical Engineer (Master of Science ίn Engineering). With a scholarship from the Istituto Italiano and the Knud Højgaard foundation he attended classes in restoration of wood at the Istituto per l’Arte e il Restauro, Firenze.

In 2003 he graduated with distinction from the Athens School of Fine Arts, where he studied painting under the professor Mr. Yiannis Psychopedis and the Associate Professor Mr. Marios Spiliopoulos. During the 2010 FIFA World Cup in South Africa he was invited to represent Denmark as one of the five Danish artists in the “2010 Fine Art” world art event and exhibition. Until today he has presented his work in 3 solo shows in Denmark and Greece and has participated in numerous group shows. He is a member of the Greek Chamber of fine Arts. Since 1993 he lives and works in Athens. 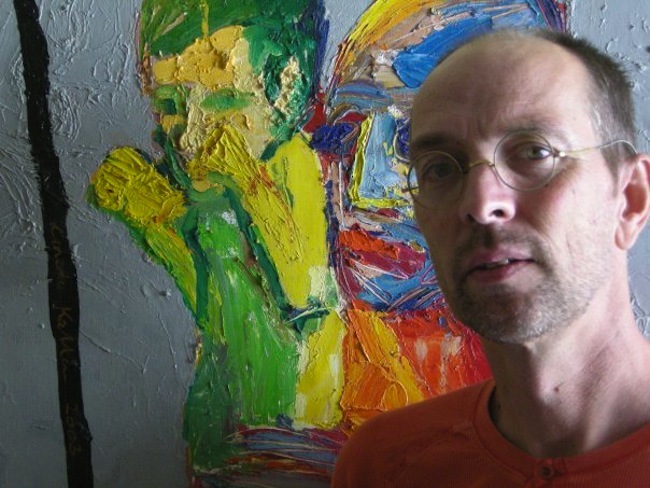 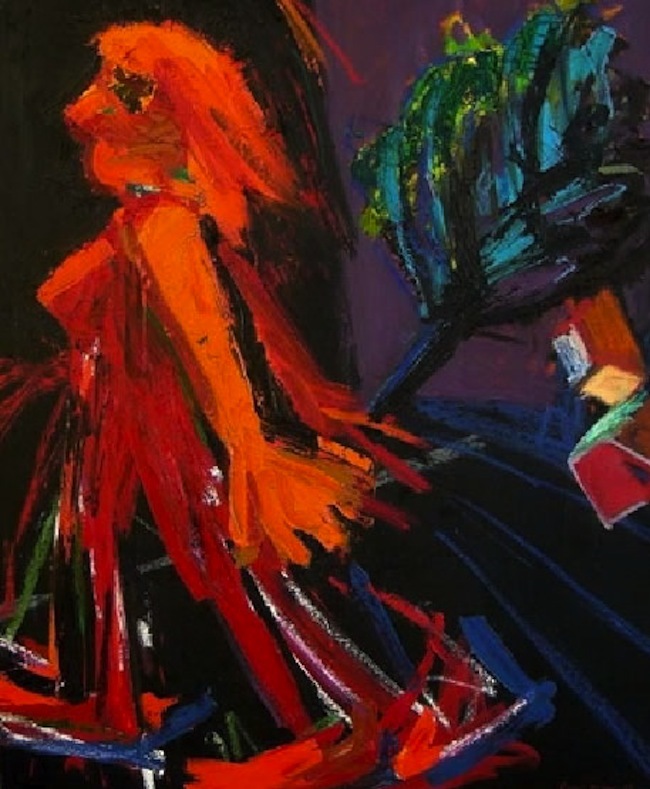 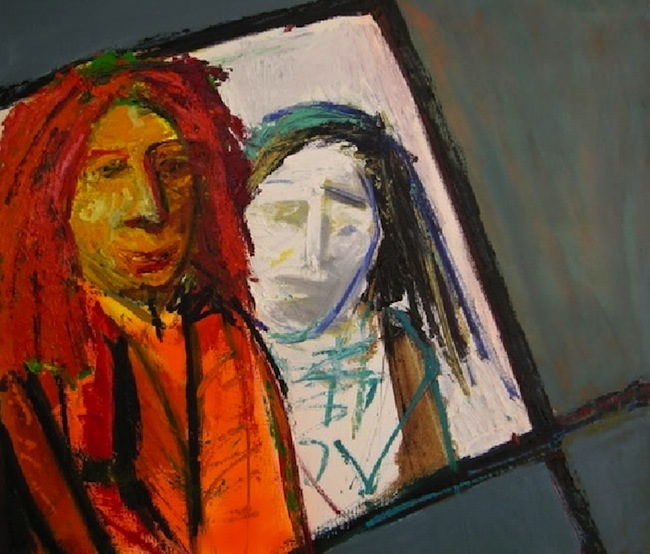 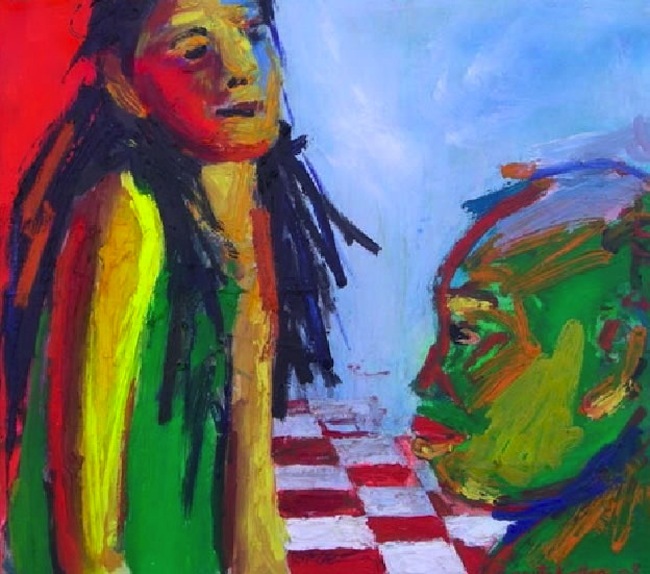 ” The paintings of Canuto Kallan are, without doubt, an integrated part of the long tradition of modernism, but they also reflect the environment in which he lives, in terms of place and time. Kallan’s landscapes rendered with fragmented surfaces and complementary sharp colours reveal his studies on Cezanne and the Cubists’ analytical idiom, as well as mainly on Expressionism, and at the same time exhibit a tender lyricism through their rhythm. Landscapes painted with the aggressive brushstrokes of the “Neue Wilden”, commenting on reality with a subtle irony. Characteristic is the painting “11 September”, where the airplane that had caused destruction is depicted, small and grey as a toy, in contrast to the enormous colourful horizontal bands and curves of the Twin Towers. Unique is also the “video wall”, which severely criticises the virtual reality of our times. A male figure coloured in warm tints of brown and red, holding a black walking stick and wearing a big green hat, returns us into the past. His posture has a balancing effect on the untamed colour and expresses a person focused in the core of his calm motionlessness. This is what differentiates him from the three contemporary pictures, that compose the “wall” opposite to him. An inexpressive male figure, coloured with glaring tints of green and the two female figures, one with a skateboard, and the other one nude. The extreme bending of the first woman’s body as well as the extreme opening of the second woman’s legs reflect the danger associated with the blistering speed and the exploitation of human beings by the principles of the market.

At the end, I would like to refer to his “Rhapsodies” that, in my opinion, highly represent the gist of his artistic creation. Their style reminds us of the political “Crosswords” of his professor Yannis Psychopaidis. In contrast they are mainly made of small – dimension people, molded plastic or levels, that intensify by way of thick clean brushstrokes and their angular outlines, the (projected feelings) sentiments that are expressed.

Covered partly by gauze or by a white coating, that lets only the eyes or the mouth to speak. Distorted as a caricature, expressing not only the genuine grief of man, but also his agony for being trapped into solitude, a subject of our times. Faces that demonstrate through the tenderness of the plain chromatic volumes and the expressions of affection and passion that unit them, the force of genuine communication. “Rhapsodies” of the polymorphism of human expression. The artwork of Canuto Kallan on canvas, paper or the silk-screen, with oil or oilpastel, connects the north with the south. It uses the vocabulary of expressionists of north, of Edward Munch, Emil Nolde, Asger Jorn. Kallan attempts, like the politically focused Jorn, co-founder of some of the most important movements of the 20th century, like the “Fantastic Bauhauss”, the COBRA or Situationism to ground his art in life, having at the same time released it from the dark, demonic mysticism of the north.

The colour that Kallan handles in a dynamic way: gestural expression soaked by the fierce light of the Mediterranean and the gentleness of the idiosyncrasy of its world. It infiltrates into the unconscious depths of human existence and illuminates hard reality without passion as well as without destroying the human tinge and measure.” 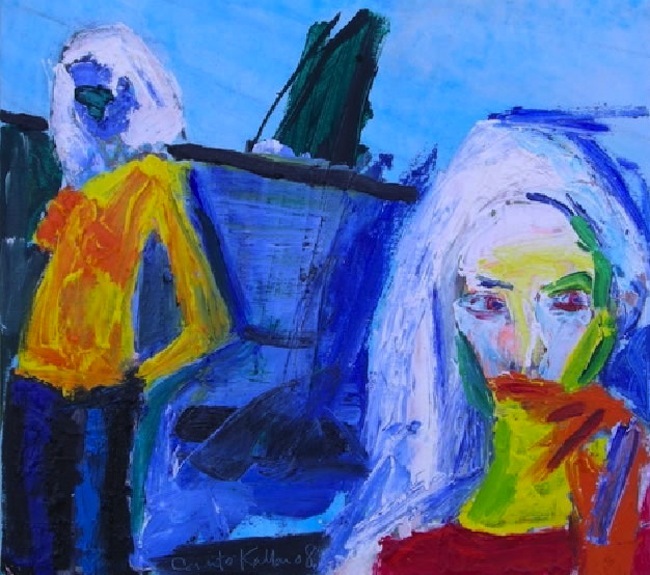 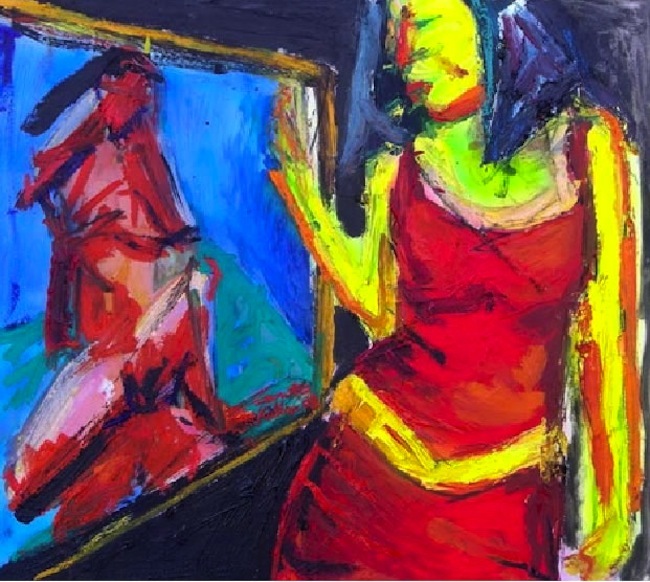 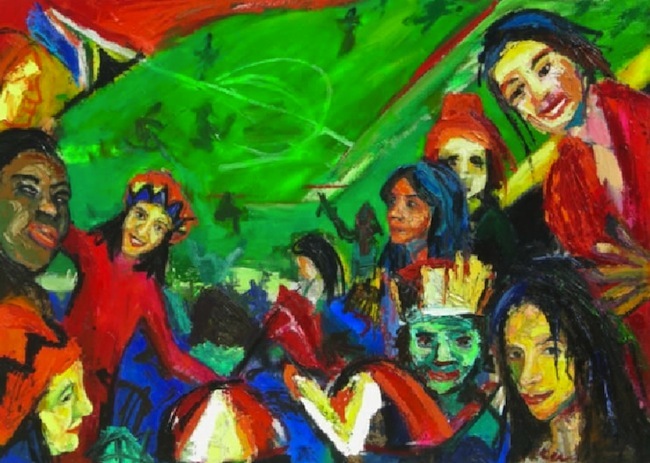 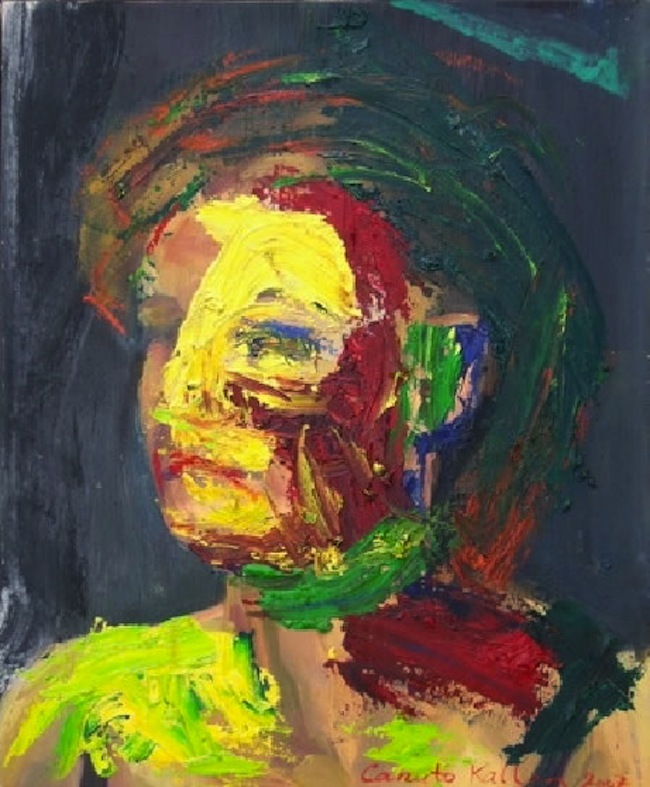 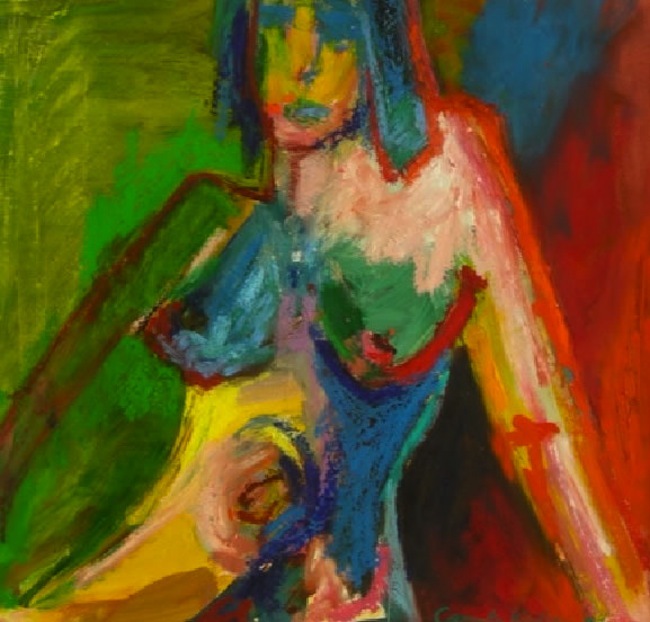 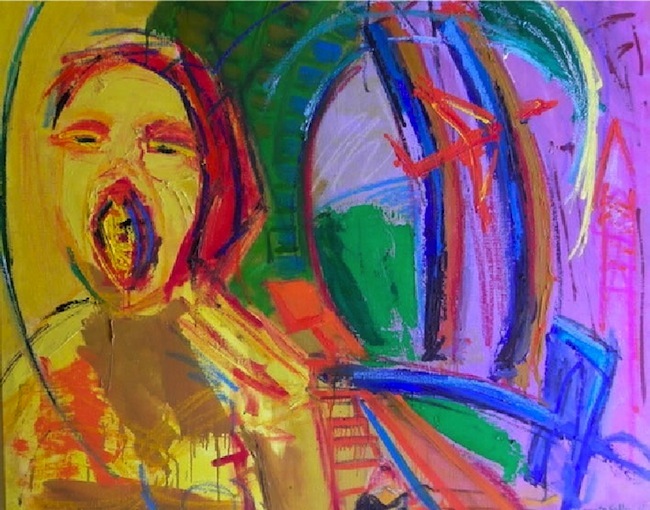 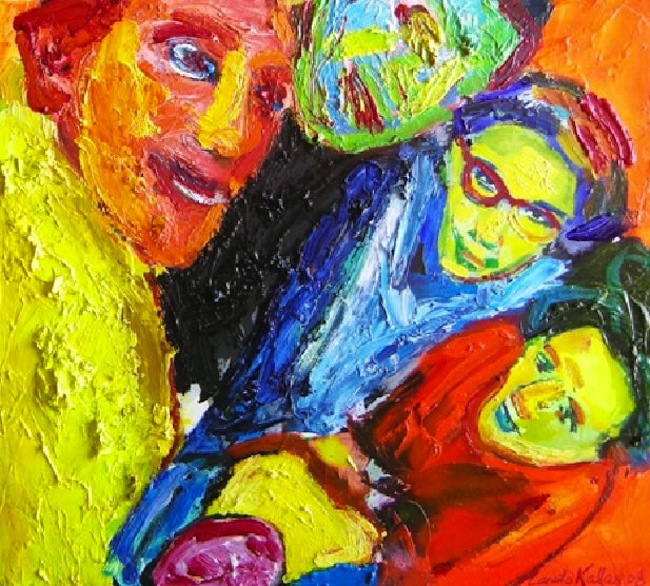 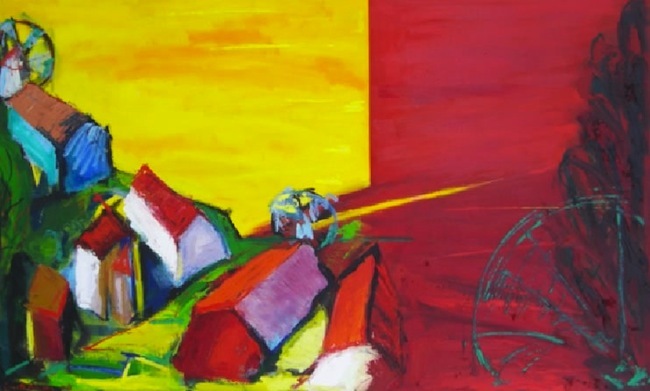 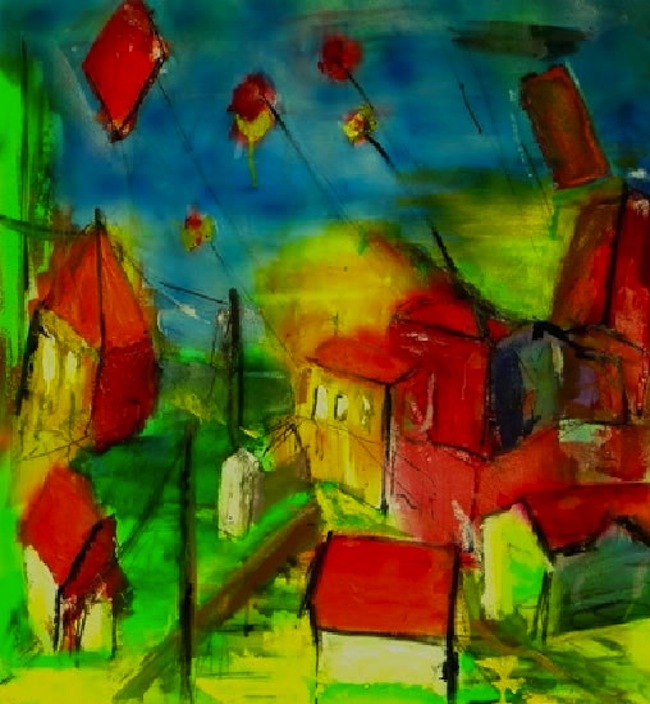 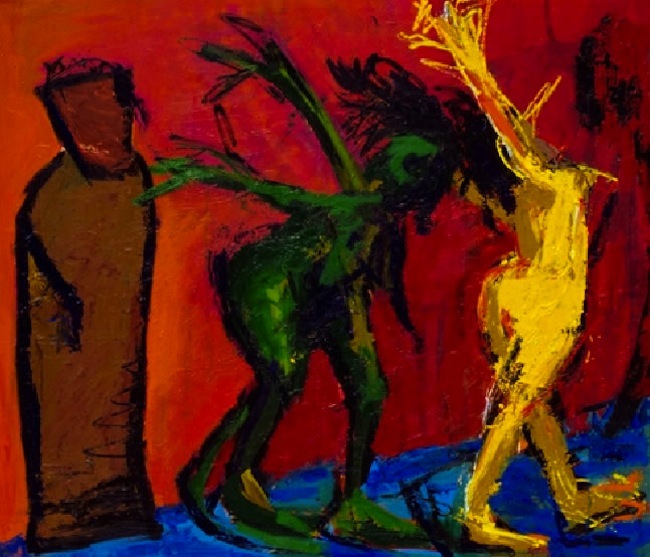 All the pictures are beautiful, your labor health!… Süheyla.

Many of the images displayed on this site are copyrighted, and are used here only for purposes of education or critical review. All rights are reserved by the artists who created the works referenced herein.
Copyright (c) 2017 Musetouch Visual Arts Magazine All Rights Reserved
Facebook
Twitter
Google-plus
Pinterest
Instagram